Sister Act the musical has arrived at the Westchester Broadway Theater stage. The musical which is based on the 1992 film of the same name and starred Whoopi Goldberg, has been staged as a musical in London’s West End and on Broadway in 2011.  The musical score was written by Tony and Oscar winning composer Alan Menken. This production features direction and choreography by Donna Drake who has been involved in numerous Broadway shows including A Chorus Line, Woman of the Year and  many others.

The story opens in the late 1970s in Philadelphia where we meat Deloris Van Cartier (Zuri Washington) who is an aspiring disco singer who is looking for an opportunity to be discovered.  Unfortunately she is the witness to a murder by a local gangster and is forced into hiding for her own protection.  The police want to keep her nearby as they prepare their case, so they hide her in a local Catholic convent run by Monsignor O’Hara (Ken Jennings) and Mother Superior (Mary Jo McConnell).  Mother Superior has no tolerance for the flamboyant Deloris and Deloris finds the restrictive life in the convent too hard to bear.

Deloris however begins to bond with some of the sisters, and soon joins their chorus which she discovers is in dire need of  her musical talent.  With an injection of funk, fun and lots of soul, the nuns find the declining attendance at church has been turned around by their choir.   The pews begin to fill to listen to their music, and with their celebrity brings media attention.  It is this attention is how the gangster finds where Deloris is hiding. I won’t give up the rest, but leave it you to enjoy at the theater. 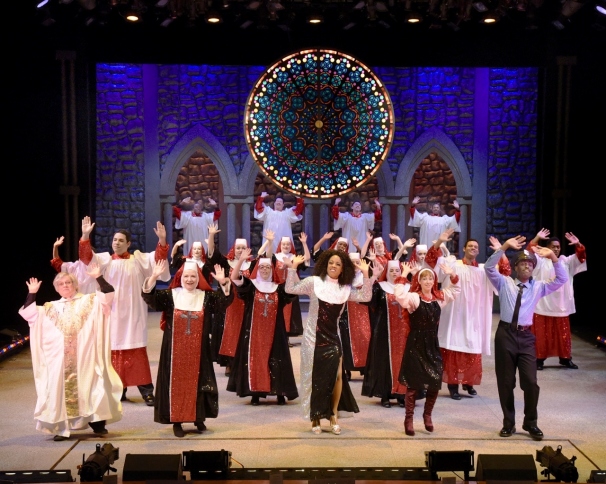 Sister Act is a fun filled and fast moving evening of music and dance.   There are wonderful performances from the large cast and I would be remiss if I did not mention the charming performance of Lani Corson as Sister Mary Robert, the youngest of the nuns.  Despite her petite size she takes over the stage and lifts the audience with her tremendous vocal range.

Sister Act is a night of musical delight as it blends the uplifting revival of a church choir with the funky, soul sounds of the 1970s.  The mainstage production runs through July 1, 2018.  Dinner is included in your ticket price and is served prior to the show.

For more information and tickets