The holiday season can be hectic, but there is more to this season then just shopping and rushing around.  Here are some fun ideas to slow you down and get you in the holiday spirit.

Katonah Holiday Stroll–   December 8th from 5 to 8pm . Downtown Katonah is open for business with shops, lights, music in the gazebo and carolers.  A fun way to get outside.    http://katonahchamber.org/events/holiday-stroll/

Ridgefield Ct. Holiday Stroll-  December 1st 6-10 pm.  Main Street Ridgefield is lit up for the holidays, with refreshments, horse drawn carriage rides,  ice sculptures and more!  Carolers sing holiday songs, and there is even living toy soldiers out and about.  A fun evening.

Lasdon Park Holidays on the Hill- (Katonah/Somers) a holiday display including a model train display, featuring NYC to Katonah to the North Pole,  decorated Main House, conservatory and gift shop  For more information and dates

The Winery at St George (Mohegan Lake)-   December 9th – a real treasure of a venue in Northern Westchester!  Inside a stone church is this fantastic music and dining venue.  Come enjoy great food and wine and hear the amazing Andrea McArdle sing holiday songs and songs from Broadway.   Andrea was the original Annie on Broadway and still thrills audiences with her wonderful voice.  A must see show

The Greenwich International Film Festival is presenting a special  advance screening of the award winning German film, “In the Fade”  starring Diane Kruger.  The movie which has won the Best Actress Award at the Cannes Film Festival.  The film is in German with English subtitles.    Come see this special film before its general release.  December 5th 2017 at 7 pm at the Bowtie Cinema 2 Railroad Ave. Greenwich, Ct.

On Thursday November 16th, you can celebrate women who make a difference and have a real impact on the community.  The speaker at this event  focuses not just on her past accomplishments  but what really matters to her and how it has contributed to her success.

November 16th promises to be an inspirational luncheon at Greenwich Country Club with the nationally recognized speaker and author, Gretchen Carlson.

Ms. Carlson is a former Miss America, graduate of Stanford University, a reporter for CBS and several television stations in Texas, Ohio and Virginia before coming to Fox News.  She has had the honor of gracing the cover of this year’s Time Magazine titled, “Gretchen Carlson wants to change the way women fight sexual harassment.”

This will be Ms. Carlson’s first appearance following the publication of her book, http://www.greenwichchamber.com/events/details/women-who-matter-luncheon-2017-5167313The luncheon is Thursday, Nov 16 from 11:30am until 2:00pm at Greenwich Country Club.

All attendees will receive a copy of Ms. Carlson’s book. A portion of final proceeds will be donated to Ms. Carlson’s “Gift of Courage” fund established to empower women and girls.

For tickets and more information

A fantastic production of William Shakespeare’s  Romeo and Juliet is playing now at the Westport Country Playhouse in Westport Ct.  The famous love story of two star crossed lovers set in Verona , Italy is still famous today as it was when it was written in 1597.  Although the story of Romeo and Juliet has origins in Italy as early as 1320, long before Shakespeare was born, it was his play that has transformed this story into an ageless classic that is still relevant today.

The current local production at the Westport Country Playhouse is a worthy interpretation of this timeless classic.  Directed by Mark Lamos  who has been described as “one of the finest Shakespearean directors in the world”.  Mr. Lamos and his team has assembled a wonderful cast and with beautiful and rich costume design by Fabian Fidel Aguilar which helps capture the rich setting of the play. 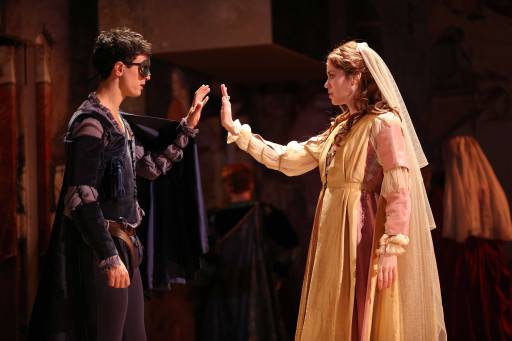 Shakespeare’s style of writing in iambic pentameter is somewhat challenging to follow at first when the play opens.  The actors stress alternative syllables in the verse.  However as the play moves onward your ear becomes attuned to the complex language and its delivery, and it is not only enjoyable, but quite brilliant.

The story of Romeo and Juliet is well known,  but for those who need a refresher, the story takes place in the city of Verona Italy where two families, the Capulet’s and the Montague’s are at war with each other.   Her we meet Juliet who is just 14 and whose father has plans to marry her off to a man she does not know or love.  At a chance meeting at a party, Juliet encounters Romeo who is a member of the rival family.  It is indeed love at first sight, but a love that is not acceptable to either family.  The young lovers have their own plans, and as the audience will find they will wind up together, but not as they had certainly planned.

The cast of mostly members of Actors Equity include a truly moving performance by Nicole Rodenburg as Juliet (she has trained at the Shakespeare Globe Theater in London). Her performance was for us the highlight of the evening, innocent yet complex as she brings the character of Juliet to life. James Cusati-Moyer as Romeo does a fine job and Patrick Andrews commands the stage as Mercutio. Alison Cimmet plays  Capulet’s wife, Felicity Jones Latta offers an emotional and moving performance as the Nurse, and Peter Francis James is captivating as  Friar Lawrence.   A fine cast also rounds out the rest of the players.  The set is somewhat minimal in the style, yet colorful  of the plays of the period, but Juliet’s iconic balcony was present and well incorporated into the stage.

A wonderful production with first rate acting and direction.  If you want to see a Shakespeare play and have not, or it has been a long time since you have seen one, then please get tickets to this brilliant show.

Now through November 19th at The Westport Country Playhouse

The wonderful story of the Tony Award winning Bridges of Madison County (the Musical) is now playing at the Music Theatre of Connecticut in Norwalk.    The musical is based on the best selling 1992 book of the same name by Robert James Walter, later made into a movie starring Clint Eastwood and Meryl Streep (1995)  and was adapted as a musical and produced on Broadway where it received 4 Tony nominations (winning 2) and won 2 Drama Desk awards.  This heartfelt drama with an excellent score is now making a brief run in Norwalk, and  this is a must see show.

If you are not familiar with the story, it involves a lonely Iowa housewife, Francesca who was a war bride from Naples Italy.  Her Italian fiance was killed in World War 2 and she marries an American G.I. who brings her back to the United States where they live on a secluded Iowa farm with their two children.  Secretly she yearns for her life back in Italy and her lost love.  When her husband and two children go off to the State Fair for a few days, she finds herself alone.  By chance, a photographer Robert Kincaid, from the National Geographic who is doing a photo essay on the local covered bridges  stops by looking for driving directions.  This new stranger who is a world traveler awakens something in her long slumbering soul.  His camera and his photographs serve as a metaphor for the wide world outside the flat Iowa farmland where she feels trapped and alone.

The two find themselves in a few short days falling in love, and Francesca feels alive for the first time in years.  But they are two ships passing in the night, and though the pull of this new love is strong, Francesca cannot leave her family for her new love.  The characters and the audience in this emotional story are left with the lingering thoughts of what might have been.

The play stars Juliet Lambert Pratt as Francesca who delivers  a truly Broadway quality performance.  Her voice was emotional and moving as it filled the theater.  All eyes in the audience were fixed on her truly passionate performance.  Her experience on Broadway (Les Miserables) as well as National Tours and Regional appearances served her well as she shines as Francesca, and brings her to life in front of your eyes.  A truly exceptional actor and first rate talent. We hope to see her again in a future performance.

Sean Hayden takes on the demanding role as Robert Kincaid, the photographer.  He gives a wonderful performance and tackles the extensive musical score.  He has appeared in Lincoln Center and off Broadway as well.   The rest of the cast Frank Mastrone (Charlie) and his wife Kirsti Carnahan (Marge) bring some comic relief to the tension in the drama. Greg Roderick plays Bud the husband of Francesca and the rest of the cast of Matt Grosso (Michael), Megan O’Callahan (Carolyn) and Mia Scarpa (Marian) help round out the story of these two lovers .

Excellent direction provided by Kevin Connors, who also is the co-founder of the theater and Artistic Director.  His directorial resume is long and very impressive.    All members of this cast are professional actors and members of Actors Equity Association.

This wonderful show runs through November 19th with performances at Fridays at 8pm,  Saturdays at 4 pm and 8pm and Sundays at 2pm.  Tickets are $30-55 which is a bargain for the fantastic quality show you will experience.   Reservations are suggested.  The theater is small and very intimate and the audience is really pulled into the action of the performance.  Please do not miss it!