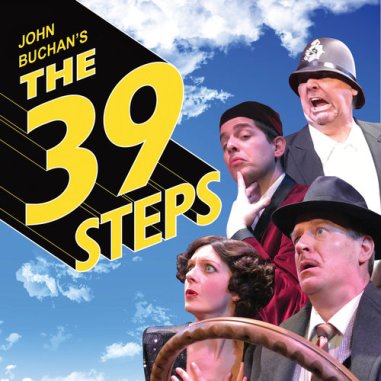 The hilarious comedy, The 39 Steps is now in production at the Music Theatre Of Connecticut in Norwalk.   The play based on the 1935 spy thriller film directed by Alfred Hitchcock was rewritten in 2005 by Patrick Barlow into a comedy based with only 4 actors.  The play has enjoyed a run on Broadway from 2008 to 2010 and then it moved off Broadway.

The play is set in 1930s Britain and follows the fortunes of bachelor Richard Hannay (Gary Lindemann) who decides to go to the theater one night in London where he makes the acquaintance of a beautiful but mysterious woman, Annabella Schmidt (Laura Cable) who says she is being  followed by spies.  The boring life of Richard Hannay is turned upside down when the woman is murdered in his apartment and he is blamed for her death.  Before dying she gives him clues about spies, The 39 Steps , and an address in Scotland.

Hannay is off to Scotland to find the secret of The 39 Steps and to clear his name.  In the interim he is pursued by the police. The police, fellow passengers on the train, and even the spies who chase  him are the all played by two actors (Matt Densky ,and MTC Director and Co Founder Jim Schilling) who provide a dose of madcap comedy to the story has they are constantly changing characters and costumes throughout the performance.  Their ability to move in an out of character and accent was quite effective and very funny.  Laura Cable also takes on more roles after the passing of the mysterious Ms. Schmidt as she takes on the roll of Pamela and later, Margaret the unexpected love interest of Richard Hannay,

In the tradition of Hitchcock films, the play is full of chase scenes as Richard Hannay escapes to Scotland on his journey to uncover the spy ring and clear his name of murder.  Unlike the suspense of a Hitchcock film, this play is full of crazy comedy which kept the audience laughing all evening.  The evening is just full of wonderful performances by the very talented cast.  The small theater is in the black box style with seating on three sides, which gives the audience a special and intimate experience.  The two hour performance moved along quickly as the audience is caught up in the energy of the production.

The play runs through March 18th, so do not miss this performance.  Tickets run from  $30-$55 with shows on Friday evenings, Saturdays at 4 and 8 Pm and Sunday at 2pm.  Reservations are suggested.

For tickets and more info: