A hysterical new musical Smorgasbord is now on stage at the Ridgefield Theater Barn.   The play billed as “A Musical Menu” is the creation of Bradford Blake, a very talented and funny lyricist.  His holiday themed “Wreck The Halls” was a big hit at the Theater Barn in the past.  This musical revue has  food as its subject matter and Blake (who also directs the play), takes the audience on a wild comical ride through the world of food. 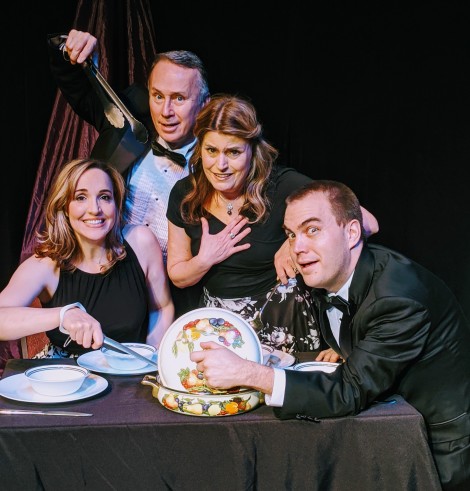 The stage of the theater features three talented musicians under the direction of Charles Smith.  They are dressed as chefs and set the tone for the evening.  The very talented and humorous cast of Anya Caravella, Tracey Marble, Robert Geils and Zachary Theis are tasked with leading the audience through a menu of 19 intricate original songs.   The vocals are quite good, and the comical acting of the cast had the opening night audience laughing the entire evening.  The cast is very talented and the vocals of Anya Caravella were quite impressive.  The direction by Mr. Blake was excellent as the timing of the comedy is spot on. 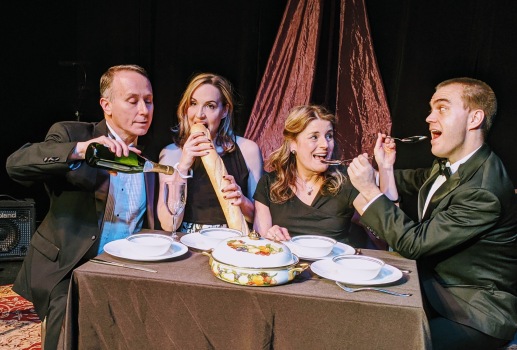 Act One which was called “First Course” is composed of 10 different songs taking the audience on a tour of different foods.  Some of the standout numbers were “Chez McDonald’s”,  “De Fruit Song” and “Pigoletto” a hilarious look at Italian cuisine.   Eating alone is never fun and “The Frozen Turkey TV Dinner Blues” is a witty look at the subject.

The “Second Course” is just as creative and comical.  The audience responded to “Taco”, “Tomorrow’s the First Day” (an amusing look at dieting), “Sukiyaki Sue” and one  of our favorites “At Lebebschmittel’s Deli”, a  very funny tune about a Jewish deli. The evening concludes with an ode to ice cream in “One Scoop”.  The song draws inspiration and from the classic 1970s musical, “A Chorus Line”.

Opening night for Smorgasbord was filled with laughter at the Theater Barn.  This is a unique venue which you must experience.  Doors open one hour prior to the performance and guests sit at tables and are encouraged to bring their own food to enjoy prior to the show.   The lobby also features a snack bar that also features wine and beer.  Support local theater and enjoy a great evening of laughter.

This very witty and amusing show runs through February 29th.    This is a show is just the recipe to shake off the winter blues with non stop comedy.