A wonderful drama has come to the Westport Country Playhouse in Westport.  Flyin West by Pearl Cleage is a compelling drama about 4 African American women set in 1898  on the Kansas prairie.  Based on true historical events, the play draws its inspiration from the real settlement of Nicodemus, Kansas which was settled by former slaves and their children who wanted to escape the poverty and racism of the post Civil War South and create a new life in a new town populated only by African Americans.

The impressive stage design is of a rustic frontier cabin where we meet Miss Leah (Brenda Pressley) the old woman whose memories of slavery form a oral tradition she passes down to a new generation.  Sophie (Nikiya Mathis) the woman who owns the land and farmhouse and dreams of expanding Nicodemus into a thriving town and a sanctuary for African Americans.   Fannie Dove (Brittany Bradford) is Sophie’s  younger sister who looks to civilize the harsh frontier with fine china for the table, and to write  down for future generations the oral stories of Miss Leah.  We also meet Wil Parrish (Edward O’Blennis) the gentlemen neighbor who looks after the women as they prepare for the long winter ahead. 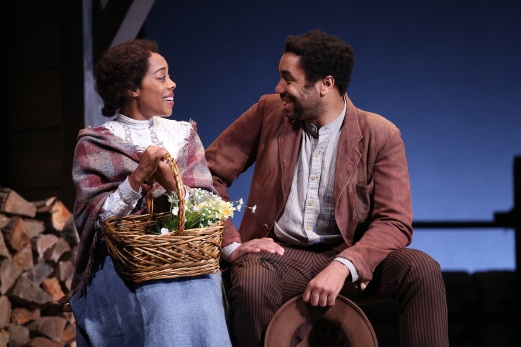 Into their lives come the youngest sister, Minnie Dove (Keona Welch) and her interracial husband, Frank Charles (Michael Chenevert) who turn the household upside down.  Frank we find is a poet and dreamer who lives in London where he looks to escape from the racism of the South.  His light skin allows him to pass as a white, and he has no taste for visiting his African American in laws on the prairie.   We find that Frank is an abusive husband, a poser, and a bit of a fortune hunter looking to live off the money of others to maintain his lifestyle.  What Frank does not expect in Nicodemus is the strong bonds of sisterhood, identity, freedom  and family that he cannot break.

As the play slowly unfolds the audience is drawn into the story and the lives of these women.  Brenda Pressley as Miss Leah gives a warm and authentic performance that makes the audience feel that you are in the cabin with them, not watching actors on a stage.  The performances of Brittany Bradford as Fannie is charming as she creates a real bond with her character.  Nikaya Mathis commands the stage as she moves to and fro reminding the audience of that this her land and she is a free woman.  A strong and compelling performance.

With wonderful lighting and the great set design you can expect from Westport Country Playhouse, Flyin West is a fantastic drama that moves the spirit .   The play runs through June 16th

for more info and tickets