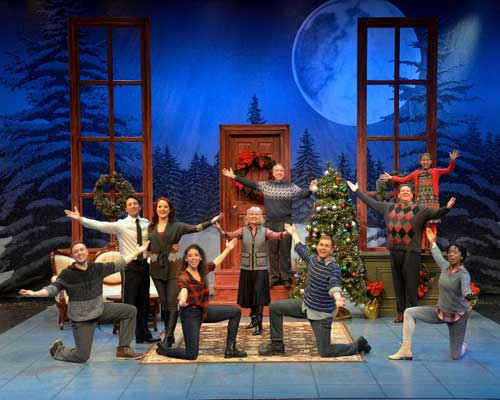 A fun and light hearted holiday musical, “Christmas Inn” has come to the Westchester Broadway Theater for a limited engagement.   It is the story of a partnership and friendship of two entertainers who leave Ireland with the hopes of making it big in America.  The story fast forwards two generations to the grandsons of the two men who are also an musical entertainment act.  However the grandsons have split up and the only bond remaining is the fact that they both are partners in an inn in Sharon Connecticut called the Christmas Inn.

Bill Brewer (Kilty Reidy) arrives at the Inn with his son, Sam (Nick Varricchio) just before Christmas to stage the annual Christmas show at the Inn.  However the Inn has seen better days, and it is also about to host Buddy Baker (Jayson Elliot) the estranged partner of Bill.  The audience discovers that Buddy as majority partner has plans to sell the Inn to developers who intend to forever close its doors.   Will the Inn be saved and will the spirit of the holidays warm the heart of Buddy?

The cast includes Maxine the innkeeper (Ann-Ngaive Martin) who adds comedy to her scenes including her alcohol tinged performance of the “12 Daze of Christmas”.  Also impressive is Sara Cline (Linda Baker) who provides the evening with some of the best vocal performances.

The rest of the talented ensemble of Holly Googe, Joel Pellini, Daniel Scott Walton and Gabriella Perez (prior on the WBT stage in Man of Lamancha and Showboat) sing and dance their way through the numerous Christmas songs that make up the musical.

The character of 10 year old Josie Evans (Molly Siena Culot/Ruby Griffin) is an important one in bridging the divide between the partners.  Her solo performance at the end of Act 1 was inspiring. 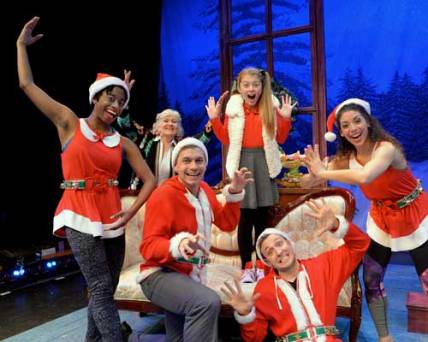 The light hearted musical is filled with Christmas carols that are woven throughout the story.  At the finale, the cast invites the audience to sing a long in some Christmas tunes.

A fun evening and perfect to put you in the holiday spirit.

Ticket Prices Dinner & Show range between $56.00 and $84.00 PLUS TAX depending on the performances chosen. Beverage Service & Gratuities are not included in the ticket price. Discounts are available for children, students, and senior citizens at selected performances. Also check the website for on-going Special Offers! The show is playing through December 23rd  2016

for more information  and tickets