The classic 1970s TV  hit Happy Days comes to the Westchester Broadway Theatre as a fun and family friendly musical.  The musical has been adapted from the long running and iconic TV sitcom that takes place in the  1950s and 1960s, which ran for 11 seasons from 1974 to 1984 and was one of the highest rated television shows of that time.   Creator Garry Marshall has written the book for the musical and music and lyrics are by Paul Williams.

Though the show was not on Broadway it debuted at the Goodspeed Opera House in Connecticut in 2007 and later was produced on National Tours and European tours.  It has now arrived here in Westchester at the WBT and all the favorite faces from the TV show are here, including Fonzi, Richie Cunningham and his family, Chachi, Ralph Malph, Potsie and Arnold!

The story is set in 1959 in   Milwaukee and the plot involves the fact that the property on which Arnold’s (the gang’s favorite hangout)  has been sold to developers who intend to demolish the  building.  In fear of losing their favorite eatery, Richie and his friends devise a plan (and with the help of his father ) to host a fund raiser to save Arnold’s from the wrecking ball.  Even returning to the scene is Pinky Tuscadero  (Fonzie’s girlfriend) who had a limited part in the TV show but has a larger role in this production. 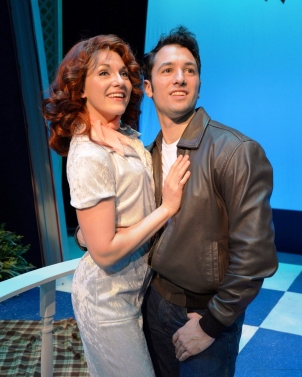 Pinky and The Fonz

This light hearted musical features the theme song to the TV series, as well as 21 songs which are woven through the show that remind us we are in a late 1950s to early 1960s setting.  There are fine performances from Herb Porter(Richie), Lori Hammel as Mrs. Cunningham, Nic Varricchio as Fonzi and  Maria Logan as Pinky.  The rest of the cast does a fine job.   The sets include Arnold’s diner, the Cunningham’s kitchen and the Cunningham’s yard which all featured prominently in the TV show. The performers do not try to imitate the original sitcom cast but give performances in the spirit of those characters.

Jonathan Stahl directed the performance and he has years of theater experience in directing, stage management and choreography.

So come and be happy !  Come see Happy Days at the Westchester Broadway Theater.   Dinner is included in your ticket price and is served prior to the performance.