A very funny and poignant play is now on stage at Music Theatre of Connecticut in Norwalk. Sylvia by A. R. Gurney was first produced off Broadway in 1995 and starred Sarah Jessica Parker and Blythe Danner. That production received Drama Desk Award nominations for Outstanding Play, Outstanding Actress in a Play (Parker), and Outstanding Costume Design.   In 2015 the it opened on Broadway and featured Matthew Broderick, Annaleigh Ashford and Julie White as cast members.

The plot of the play involves an older couple Greg (Dennis Holland) and Kate                  ( Carole Dell’Aquila) who after raising their children in the suburbs have decided to move back to New York City.  Liberated from child rearing, school schedules, yard work and other suburban chores, the couple look forward to this new phase of their life.  Kate has returned to work as a teacher and is energized by her new role, new friends and new life.  Greg however feels quite the opposite.  He begins to lose interest in his job as well as his new life.  Leaving work early he wanders through the park only to discover a dog who like himself seems lost and alone in the big city.  The only clue to identity of the dog is her collar with her name, Sylvia.   Sylvia the dog is played by a human, Bethany Fitzgerald, whom he takes home.

Kate, Greg and Sylvia the dog

Kate is not pleased with Greg bringing the dog home, but relents and allows the dog to stay a few days until they can find it a new home.   Kate sees Sylvia as a hindrance to her new found freedom in the city.   Over the next few days Greg and Sylvia bond and it seems to Kate that Greg is having a mid life crises and Sylvia is quickly replacing her in their marriage.   There are some very funny scenes as Sylvia bounds around the stage, gnaws on Kate’s shoe, climbs on furniture and cuddles with Greg. 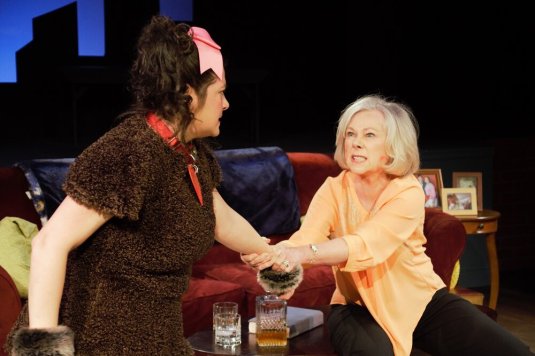 Sylvia and Kate at odds

Greg discusses his plight with his new found friend and fellow dog lover (Jim Schilling)  and Kate seeks out a therapist (also played by Jim Schilling) for help in saving her marriage and dealing with Greg and Sylvia.  But saving their marriage and new found life will come with compromises.

Though the play is a comedy and the physical comedy of Bethany Fitzgerald as Sylvia bring many laughs to the audience, the play too is filled with many thought provoking moments.  The subjects of love, mid life crises, and alienation in the modern world are all touched and leave a lasting impression on the audience.  Sylvia is just one of the many fine productions we have seen at this gem of a local theater.   The play is wonderfully directed by Kevin Connors who always brings out the best in his actors.

For tickets and information:  https://www.musictheatreofct.com/