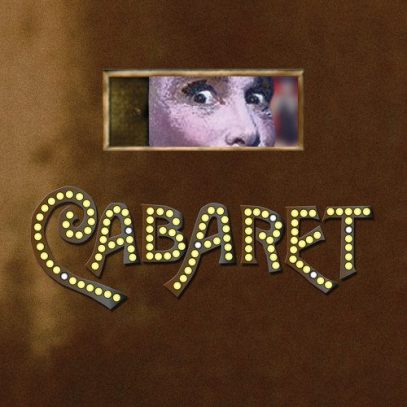 Cabaret the multi award winning musical is now on stage at MTC, the Music Theatre of Connecticut in Norwalk.  MTC has produced another fine show that premiered this past weekend  and runs through Sunday April 14.  Like all the shows we have enjoyed at this local theater, this production is first rate and should not be missed.

Cabaret is a 1966 musical with music by John Kander, lyrics by Fred Ebb, and book by Joe Masteroff, and  was adapted from the short novel Goodbye to Berlin by Christopher Isherwood.  The setting is Berlin in 1931.  The city of Berlin in the period between World War 1 and the rise of the Nazis was the center of the arts and culture of Weimar Germany.   The play is set at the seedy Kit Kat Klub and at a rooming house.  We are introduced to Cliff Bradshaw (Nicholas Dromard) an American writer who is traveling to Berlin in hopes the artistic atmosphere will kick start his novel.  He meets on the train to Germany a mysterious man, Ernst Ludwig (Andrew Foote) who befriends him and finds him cheap lodging at a Berlin boarding house.  Here we are introduced to woman who owns the building, Fraulein Schneider ( Anne Kanengeiser) and fellow boarder, a Jewish fruit merchant named  Herr Shultz (Jim Schilling).   Ernst takes Andrew out on the town to the Kit Kat Club.  Here we meet the iconic character The Emcee (Eric Scott Kincaid) and the entertainers including Fraulein Kost (Hillary Ekwall) and  Sally Bowles (Desiree Davar).  Sally is much like Cliff as she has come to Berlin to revel in its artistic and sexual freedoms.

Soon an unlikely romance develops between Cliff and Sally.  As a subplot we also see a romance blossom between the spinster Fraulein Schneider and Herr Schultz, even at their advanced age.  It seems that the feeling is anything is possible in post World War I Berlin.  But the idealism of the age is interrupted by a underlying current which upends the worlds of our characters.  Ernst is exposed as a Nazi and we see the rise to power of the Nazi party which threatens the very nature of German society.  Fraulein Schneider realizes that to survive in a Nazi ruled Berlin she cannot marry a Jewish man and must break off her engagement.  The gay men at the Kit Kat Klub are even the targets of the hate and intolerance of the new order.  Cliff decides the reasons for coming to Berlin are quickly vanishing and he decides to return to America with Sally.  But Sally does not flee with him stays behind. She keeps on singing at the cabaret in denial of the drastic change  on the horizon.  Even Herr Schultz feels that even though a new order is coming to Germany, not much will change.  He too is in a state of tragic denial. A poignant tale that is relevant in today’s environment of how a nation of freedom loving people can have their country slowly turned into a  dark and intolerant culture. 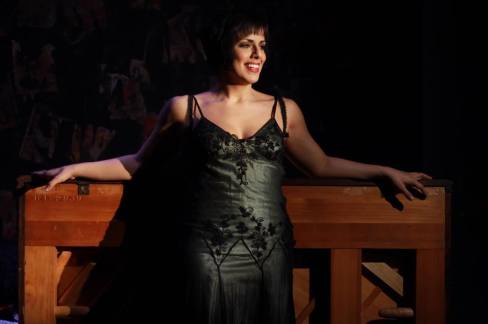 The songs of Cabaret lighten the heavy and important message of the play as they tie together all the scenes of this musical.   Many of the memorable numbers are present and wonderfully executed including “Wilkommen”, “So What”, “Tomorrow Belongs to Me” and of course “Cabaret” . 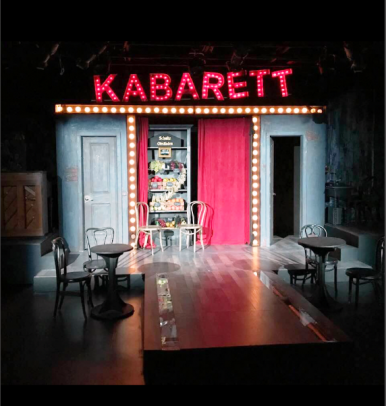 The MTC theater is a small black box style theater with the audience sitting on three sides (only 4 rows each side) which creates an intimate an up close theater experience.  The stage is small and the designers must use their artistic skills to carve out the separate scene spaces. They do so very effectively.  Due to the size the cast is smaller than might be in a larger theater but Director Kevin Connors skillfully uses the talented cast to fill the theater with drama and song.  He masterfully reminds the audience of the joys of the cabaret where we can forget our troubles, but we must be vigilant as freedom of artistic expression can be fleeting in the face of oppressive forces.  The full house on opening night approved of the great performance. The cast  is wonderful and Ms Davar as Sally Bowles wowed the audience with her fine vocal talents.

A fantastic production of a relevant and timely play that should be seen.