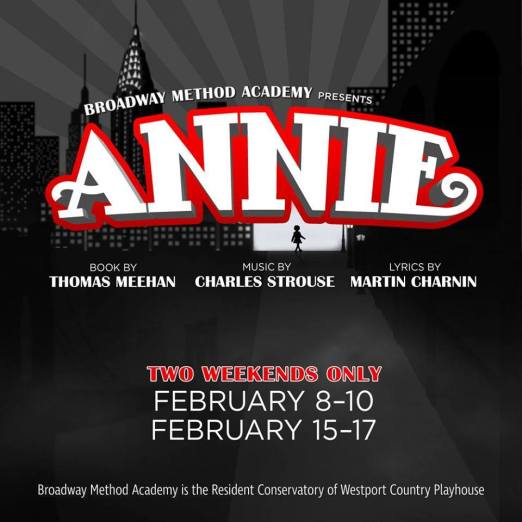 The Tony Award winning “Annie” is now at the Westport Country Playhouse through Sunday February 17th.  This fantastic production of this classic musical is a product of the Broadway Method Academy which is the resident conservatory of the Westport Country Playhouse.  The BMA is an award winning non-profit organization that can provide your children with quality, comprehensive training and instruction in the theater arts.  This production includes adult actors with credits from Broadway to film and television who share the stage with the amazing young actors from the Academy.

Annie is based on the long running comic strip, Little Orphan Annie that ran in newspapers nationwide for many decades.  Starting in the 1930s , Annie is an orphan who along with her dog Sandy, finds love and the family she desires when she is adopted by the wealthy Daddy Warbucks. 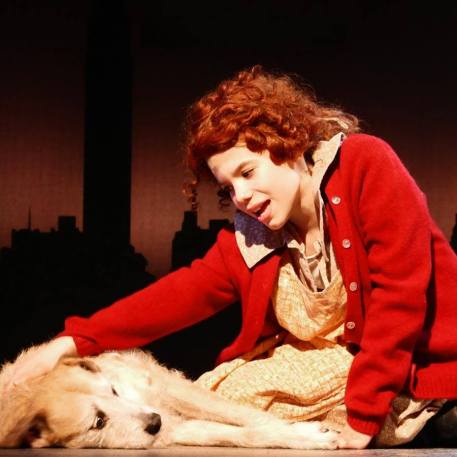 The story of Annie was adopted for the Broadway Stage with book by Thomas Meehan , music by Charles Strouse and lyrics by Martin Charnin.  The play opened on Broadway in 1977 and ran for six years.  It received several Tony Awards including Best Musical and Best Original Score and Andrea McArdle who played Annie was nominated for a best actress Tony.  It has run for many years in revivals, national tours, and in regional and local theaters.

The brilliance of the show is in the optimism and spirit of Annie and the other orphans who are faced with a tough life in the orphanage during the depths of the Great Depression.   The musical score is timeless and filled with classics such as “Tomorrow”, “Easy Street”, A Hard Knock Life”,  “You’re Never Fully Dressed Without a Smile” and “Maybe”.  The score and book have held up very well in this timeless story that appeals to all ages.

The current production which blends veteran actors with acting students is first rate.  With a 14 piece live orchestra, the musical performances are as vibrant as any show in any theater.  Costume and set design is wonderful and much effort  and talent was placed in  these two areas.

Paul Schoeffler who plays Daddy Warbucks gives a wonderful performance and his deep booming voice commands the stage.  He has numerous Broadway credits as well as Off Broadway, and voice over work.  Klea Blackhurst (Miss Hannigan) portrays the evil manager of the Orphanage and she brings humor to the show as well as lending her fantastic vocals.  She has numerous credits to her resume including work off-Broadway.

Lauren Sprague (Grace Farrell- Warbucks assistant) has a wide resume including National Tours, and regional theater.  We last saw her in the Westchester Broadway Theater in “A Chorus Line”.  Her fine voice lights up the stage and she is the perfect counterpart to the business-like Warbucks.

The rest of the cast is filled with members of the BMA who fill the roles as orphans, maids, NYC residents, radio guests, and much more.  Ava Lynn Vercellone takes on the enormous role as Annie, and her vocals and acting ability charmed the audience on opening night.   Sunny the dog who is a rescue animal plays Annie’s pet dog, Sandy and was an audience favorite.

Connor Deane as director should get special credit for this  fantastic production of Annie.  The stage was filled with so many young actors, yet the effect on the audience was that we were watching a Broadway performance.  Well done!

For Tickets and information:  https://www.westportplayhouse.org/BMA-Annie