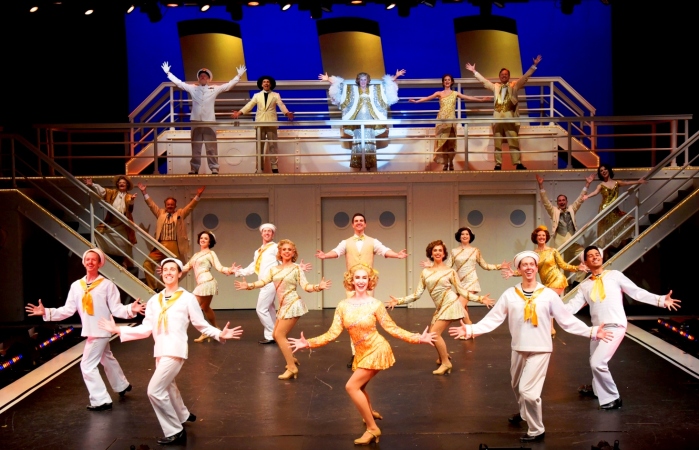 The classic Cole Porter musical Anything Goes has arrived in high style at the Westchester Broadway stage.  This 1934 classic is cast in the traditional Broadway musical mold including a memorable score, numerous dance numbers, great costumes and an elaborate set.   All of these elements are here on the WBT stage and few theaters outside of Broadway can produce a musical of this quality like WBT.  The theater has built a solid reputation by staging productions of classic musicals.  In the past few years, WBT has staged South Pacific, Man Of LaMancha, Show Boat and Annie Get Your Gun.  They are also adept at weaving in to their schedule more modern shows such as Mamma Mia! and Sister Act.   WBT also draws top acting talent with actors who have credits on and off Broadway as well as national tours.

The musical is set on a passenger ship sailing from New York to London.   Here we meet a cast including a nightclub singer, Reno Sweeney (Stacia Fernandez),  a young woman about to be married to save her family from financial ruin, Hope Harcourt (Jackie Raye), her much older British fiancé Lord Oakleigh (Kevin Pariseau) and Hope’s real love interest and ship stowaway, Billy Crocker (Zach Trimmer).  Add to this group, is a gangster on the run and his girlfriend, the mother of the bride to be,  a wall street banker who is a guest at the wedding and the ship’s crew.    A wild ride ensues as the crew seeks out the stowaway and the gangster, Billy tries to win back Hope and stop the wedding, and  Reno steps in to help Billy win back Hope.

The story though written in the 1930s has been updated and altered during the various revivals over the years.    Written in a simpler time, the musical has a simple plot following the boy meets girl/boy loses girl/boy gets girl back formula that is common in literature.

The score by Cole Porter including “Anything Goes” and “I Get a Kick Out of You”  is memorable.  The evening is filled with fine acting and vocal performances from Stacia Fernandez as Reno,  Zach Trimmer as Billy, and a wonderful solo performance of “Goodbye, Little Dream, Goodbye” by Jackie Raye as Hope that was  quite impressive.

What makes Anything Goes shine is the fantastic tap dancing by the ensemble.  Every inch of the square WBT stage is alive with carefully choreographed  tap and dance numbers that liven up the tempo of the show to the delight of the audience.  Credit to Richard Stafford for his fine work with the cast as director and choreographer.

Set design which is always strong at WBT is on display again with a steam ship with several doors, decks and smoke stacks dominating the stage and setting the mood.  Well done by Steve Loftus and his crew.

A special credit goes out to costume designer Keith Nielsen for the fantastic job on all the costumes which capture the period of the 1930s correctly.  The large ensemble of actors (over 20) have multiple costume changes during the performance.

So don’t miss the ship as this show sets sail from the theater on  September  9th (last performance).

For more info and tickets (dinner included in your ticket price)