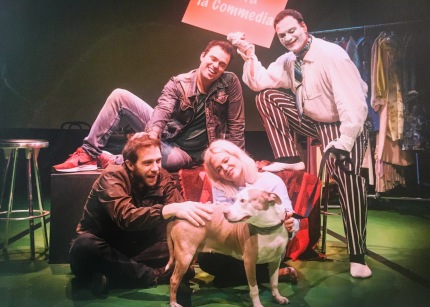 We were thrilled to experience our first production at the Schoolhouse Theater in North Salem last evening.  Now on stage at this gem of a theater is “ The Dog in the Dressing Room” a romantic comedy written by  Deborah Savadge.  This comedy is a real audience pleaser with a funny fast moving script, sharp direction, and wonderful performances from the four person cast.

The play is set in the backstage of a theater that is preparing for opening night.  Here we meet our characters, The Mime (Nicola Iervasi ), who introduces the audience (silently) to the play, and appears at various times in the play to signal changes in the scene.   We also meet Kira (Estelle Bajou) the actress who has landed a major role in the play.  Her long time friend, party buddy and confidant Kevin (Jack Utrata ) and the Company Manager Joel (Gregory Perri) round out the cast.

As Kira rehearses for opening night she finds a strange dog in her dressing room.  She soon finds that the dog is a gift from the Company Manager, Joel whom she barely knows.  It seems he has been listening in on the stage intercom to the conversations between cast members.  He has become quite taken by Kira and when she tells a cast member she would love a house in the suburbs and a dog one day, Joel decides to buy her a dog.  Kira is perplexed by his gift and his intentions, and it is only complicated as the socially awkward Joel starts buying dog toys, food and shampoo for the dog and inviting himself over to her apartment to care for the dog.  Kevin who is Kira’s long time friend from high school does not like Joel and feels his behavior is driving a wedge between him and Kira.   The audience is drawn into the story which at points morphs into drama, and quickly back into a romantic comedy.  What will Kira do as opening night approaches and she learns more about the secretive Joel? Will she follow her heart or  listen to Kevin’s warnings? All is revealed  about the characters and their fate in the end when the play comes to its charming conclusion.

The direction of the play by Bram Lewis is first rate.  The pace of the play is swift, especially in the first half hour with short rapid scenes that quickly transition into the next scene.  The audience never gets to rest and is quickly drawn into the play. There is plenty of fast moving physical comedy as well.  We particularly liked a scene where Kira and Kevin leave the stage and continue their argument into the audience aisles. It really grabbed the attention of the house.  A very effective method of writing and direction.

Estelle Bajou as  Kira has credits as a Drama Desk nominated actor.  Her performance is wonderful.  Her eyes and face are full of expression as she moves through many different moods during the play.  She is really a strong actor who commands the stage.   Jack Utrata who has off Broadway and National Tour credits is hysterical as Kevin, Kira’s flamboyant friend.  His style of exuberant physical comedy had the audience laughing.  Gregory Perri does a fine job as the awkward Joel  and Nicola Iervasi  entertained us all as the Mime who meanders through the 85 minute performance.  There is one more cast member to meet, but we will leave that as a  surprise for the audience.

The Dog in the Dressing Room is a fun, fast moving and very entertaining play and playwright Deborah Savadge has done a great job bringing these interesting characters to life.  This is the World Premiere of this play, and we can only see more success for it in the future.

The production  runs through July 1st with performances in the 99 seat theater on Thursday, Friday, Saturday at 8pm and Sundays at 3pm.

Prior to the show make sure you browse the art gallery also housed in the Schoolhouse building. Free parking.