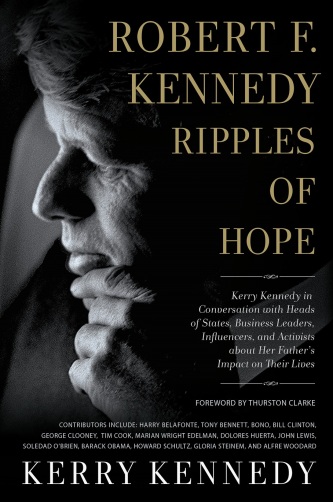 The Bedford Playhouse is hosting a very special event, “An Evening with Kerry Kennedy” on Thursday June 5th 2018.   This intimate evening will include  a screening of the 1968 documentary film, “Robert Kennedy Remembered“.   This film was  produced and released 50 years ago and broadcast on network television and at the 1968 Democratic Convention.  The film received an Academy Award for Best Documentary Short of 1968.

This deeply  moving film  is  a tribute to a man who had hoped to win the presidency during the very turbulent year of 1968. Commissioned by the Kennedy family, the film begins with the funeral train to Washington, D.C. and follows the triumphs and tragedies in the late Senator’s life with extraordinary newsreel s,  stills, and home movies. The film was produced in only four weeks, two months after Senator Kennedy’s assassination, in order to be screened at the  Democratic National Convention.

Following the screening there will be a special Q & A session with Kerry Kennedy, daughter of Robert F. Kennedy who will discuss her new book  “Ripples of Hope” . The book about her father, includes conversation with heads of state, business leaders and activists about her father’s influence and impact on their lives.

Do not miss this very special evening of at the Bedford Playhouse.

Ticket holders will receive a  signed copy of the book “Ripples of Hope” and a small popcorn.