On May 1st 2018 the Greenwich International Film Festival kicked off the festival season with its launch party at Richard’s in Greenwich.   At the party guests and media heard from GIFF  founders Colleen DeVeer, Wendy Reyes and Executive Director and COO, Ginger Stickel who informed guests of the exciting program that they have put together for this years festival. 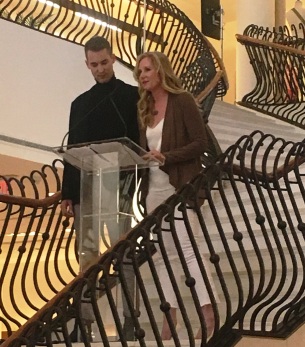 The film festival runs May 31 to June 3rd 2018 and will feature documentary films, full feature films, panel discussions, short films, opening night party, and the Changemaker Gala .  It is four days packed with film and more with an emphasis on making a strong social impact, and to raise money for deserving charities.

Greenwich International Film Festival announces the honorees for the 4th annual Changemaker Gala, which will take place on May 31, 2018. The Changemaker Award honors artists who have used their public platform and the power of film to further positive social change.  This year, actress and author Ashley Judd, will be honored for her work with United Nations Population Fund (UNFPA). Duncan Edwards, the Community Changemaker honoree at the 2018 festival, will be recognized for his work in education with the Waterside School in Stamford, CT. The school, conceived as model for future efforts, is an independent school  serving children and families regardless of limitations in income or circumstance. Past honorees include Renée Zellweger, Christy Turlington Burns, Freida Pinto, Trudie Styler, Abigail Breslin, Harry Belafonte and Mia Farrow.

Greenwich International Film Festival (GIFF) is a 501(c)3 non-profit organization that hosts a world-class film festival in Greenwich, CT. The goal of the festival is to bridge the worlds of film, finance and philanthropy. The fourth annual festival will take place May 31-June 3, 2018, and will support important human rights initiatives, as part of its social impact focus.  The four-day event will feature a star-studded Opening Night Party, film premieres, engaging panels, an honoree gala, and more.  For additional information, please visit