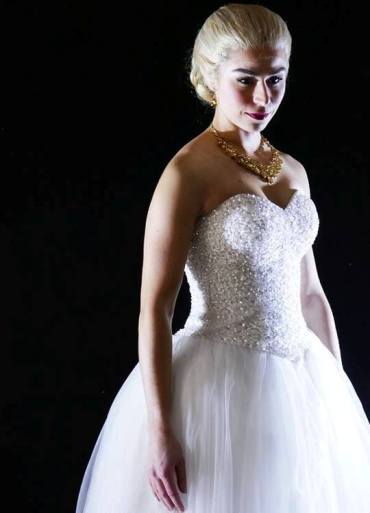 The Broadway smash hit  Evita opened to a standing ovation at the Westport Country Playhouse.  The  Tony Award winning musical was written by Tim Rice and Andrew Lloyd Webber  and chronicles the rise to fame of Eva Peron, the actress turned wife of President Juan Peron of Argentina, her tragic demise and her elevation to an icon with the people of Argentina.

This production at the Westport Country Playhouse is unique in that it merges the talents of four experienced professional actors (members of Actors Equity Association) , professional dancers, with a ensemble of students from Broadway Method Academy.  The blending of all this talent backed by a 9 piece orchestra created an evening of powerful theater under the direction of Connor Deane and a fantastic creative team.

This is a very limited production of just 4 days and is certainly a production you should not miss.   The musical (there are really no speaking parts) was very dramatic and moving as if follows the arc of the public life of Eva Duarte Peron.  Samantha Pauly was tasked with the enormous role of Eva Peron and she was brilliant.  Her voice is so strong and dramatic, that the audience is swept  up in the drama unfolding onstage.  Her acting and the expressions on her face and in her voice gave the viewer the true feeling that they were watching Evita herself.  A truly amazing and moving performance.

Yurel  Echezarreta plays the role of Che, the narrator of the story and who helps stitch together the various scenes and moments in Evita’s life. His voice is strong and impressive and his acting is superb.  His performance was outstanding as he brings some needed comic relief at times to the story.

Kyle Barisich (Juan Peron) and Julian Alvarez(Magaldi) round out the cast of professionals on stage and they do a wonderful job.  But the evening belongs to Evita, and Samantha Pauly has full command of the stage and audience and  she is radiant.

The ensemble of young actors (pre teen and up) help fill out the cast whether singing as an ensemble or dancing or providing the much needed crowd for certain scenes in the performance. Credit to all these young actors (almost 40 of them) for their efforts in making this a successful production.

The score by Andrew Lloyd Webber ( Phantom of the Opera, Cats) is dramatic and moving  and stays with you long after the house lights go up on this performance.  If you have seen this play, or it is your first time, do not miss Evita at the Westport Country Playhouse.