Are you a fan of Mob movies like the The Godfather, Goodfellas, or the series The Sopranos? Do you wish at times you were part of the drama that takes place in these shows? Well you can if you spend an evening with the talented cast of “Murdered By the Mob” 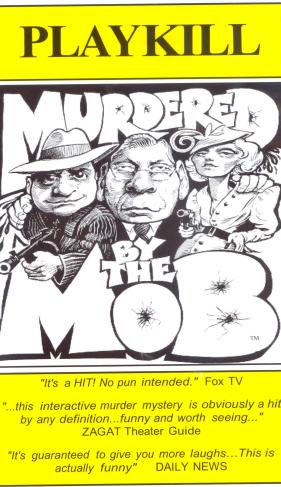 This show takes place at the Arno Dinner Theatre, 141 West 38th Street NYC, in the lower level of the Arno Restaurant. The show includes dinner and dancing and you are part of the show from the minute you sit down. Guests are seated at long tables, “family style” and you might find one of the cast members sitting at your table much to your surprise. 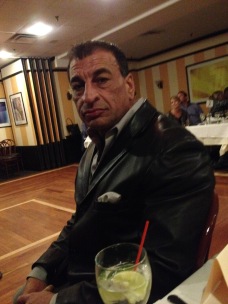 Vito seated at our table

The setting of the play is a restaurant where there is a party being thrown for the new mob boss, Johnny Scudato who is taking over for the now deceased “Don”, Paulie. Also at the party, is Johnny’s wife Bunny, Vito the family consiglieri (who was seated at our table),  Rocco(the brother in law), his girlfriend, Cookie , and Dona Rosella the widow of Paulie. The party is going along fine when the lights go out and a murder takes place. The police arrive and Detective Romano takes over. The laughs are non stop as Detective Romano who is brilliant at improvisation as he really engages the audience in the action. The audience is  constantly laughing as he interrogates the  both members of the audience and the cast trying to solve this mystery. 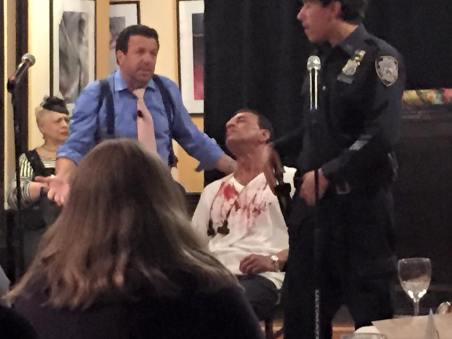 In between all the laughter, dinner is being served and drinks are flowing. Dinner which is included in your ticket price consists of rigatoni ala vodka, Chicken parmagana , a side dish, and coffee and cookies. A veggie and low carb meal is available and should be pre ordered. There is a cash bar for wine, beer and cocktails. 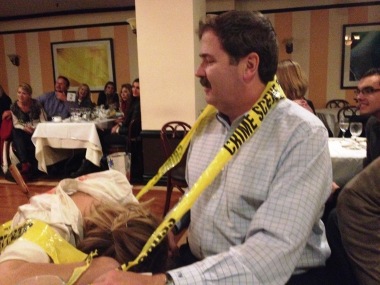 The audience is part of the play

Audience members interact with the cast, dance at the party for the Don, are interrogated by the Detective, and are even asked to try and solve the mystery and win a prize. We had a fantastic time and were laughing almost the entire time of the two and half hour performance.

If you want to be part of a “mob hit” , then this is the show for you.

Also check out their upcoming Mystery event at the Mohonk Mountain House in New Paltz, New York.
For tickets and information :
Murdered By The Mob
Arno Dinner Theatre
141 West 38th Street NYC Phone # 1-800-687-3374
www. murdermystery.com
http://www.thenewyorkmobshow.com
Like I On the Valley on Facebook! http://www.facebook.com/ionthevalley
Twitter: I_ON_THE_VALLEY