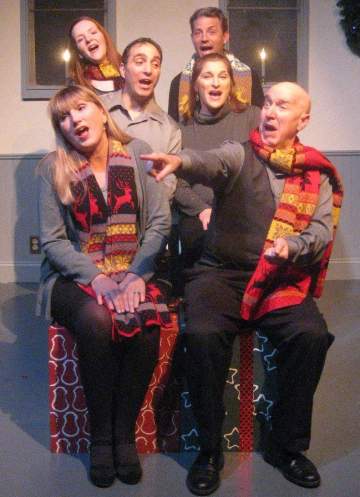 Wreck The Halls is the latest production at the Ridgefield Theater Barn in Ridgefield CT. The production is a satirical musical look at the holiday season that is one part a critique of the holidays, one part brash and mostly hysterical.
The production is not a typical musical but rather a musical revue with one separate musical number after the other and no spoken parts. Act One (approximately one hour) contains 14 songs that poke fun at the madness that can be the holiday season. From “Starting to look like Christmas” which ridicules the starting of the retail push of Christmas (its only Labor Day!), to “Grandmas House”, a send up of the dysfunctional Thanksgiving dinner with relatives, and ” Black Friday” which pokes fun at the madness of the sales that seem to overshadow the holiday season. The all original score is accented with sharp wit and clever lyrics which had the audience laughing the entire time
Act Two (about 35 minutes) keeps the humor rolling with a spoof on political correctness, “Happy Kwanzaramahanumas”, the silly but funny “The Nutcrackers Lament”, the sexy “That Yule Log” with its thinly veiled sexual references, and the “Boys in Brown” a salute to the late working package delivery men which was reminiscent of a scene from the musical, Legally Blonde. Act Two is composed of 11 songs in addition to the reprise of the opening number “Wreck the Halls”.
Wreck the Halls is the creation of Bradford Blake who is the composer, lyricist and director of this very funny musical. He is also a member of the cast as well. The lyrics are witty and creative and the score is memorable. The cast is hilarious and works well together with standout performances from Mr. Blake and Carey Van Hollen who has the best vocal performances of the evening. The balance of the talented cast includes Priscilla Squires, Diana Matson, Duane Lanham and Alexis Vournazos.

Please note there is some adult language and adult subject matter in the performance so I would not recommend this performance for children. Doors open at 7 and you can bring your own food and dine before the show which starts at 8pm. Seating is at tables, cabaret style. There is a short intermission.
Need a break from the holidays? A trip to “Wreck the Halls” may be just the ticket you need for some holiday laughs. Performances run through January 2, 2016.