Westchester Broadway Theater has just rolled out yet another marvelous stage production, Backwards in High Heels, The Ginger Rogers Musical. Ginger Rogers was one of Hollywood’s most famous dancers and actresses and is best known for her many movies with dancer Fred Astaire.

This show which opened on August 13th is a high energy, dance filled story of Ginger Rogers rise to fame. Starting at age 15 in Texas with her entering a local dance contest, we follow her path through the dance circuit, Broadway, and on to Hollywood and fame. Along the way we learn about her struggles, family life, her relationship with her Mother and her numerous marriages. The story culminates with her winning the Oscar for best actress in 1941. 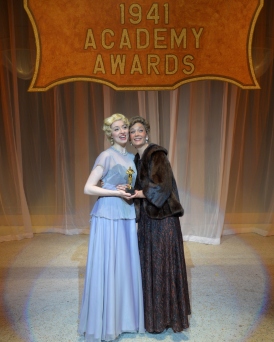 Along the way the audience is treated to fantastic dance performances and a musical score that includes original songs as well as numbers from some of her movies, such as “Let’s call the Whole Thing Off” and “A Fine Romance”.

The musical premiered in 2007 and has been produced throughout the United States. The Westchester Broadway Theatre production features choreography by Jeremy Benton and Amy Van Norstrand. Mr. Benton also directs and stars in the production.
The talented cast includes Darien Crago as Ginger and Jeremy Benton as Fred Astaire. They are very talented dancers and actors and Ms. Crago is full of energy and she is a joy to watch. The rest of the cast includes Avital Asuleen, Erika Amato, Matt Gibson, Sebastian Goldberg, Ryan Steer, Amy Van Norstrand and Jacob Ben Widmar.

All the actors at the Westchester Broadway Theatre are professionals and are members of Actors Equity and many have years of experience including Broadway appearances and national tours of various shows. Dinner is included in your ticket price and is served prior to the show. The show runs about two hours with a 30 minute intermission.
If you are a fan of classic Hollywood musicals, or a fan or great dancing, then do yourself a favor and see this show. Backward in High Heels will be on stage through September 20th.
Westchester Broadway Theatre
1 Broadway Plaza
Elmsford New York 10526