Every once in awhile a musical comes along that is brilliant for both the drama of its story and the quality of its musical score.  Phantom now at the Westchester Broadway Theater is such a show.  This amazing musical which first ran at WBT in 1992 was a smash hit with over 120,000 theater goers experiencing the magic of this performance.  This revival is just as good as that original production.  This show has been called the greatest Broadway musical  never that was never on Broadway.  I agree.

Phantom written by Tony Award winners,  Arthur Kopit and music/lyrics by Maury Yeston  is based on the 1911 book “Phantom of the Opera”  by Gaston LeRoux.   This musical which was first developed in the 1980s is not to be confused with  Andrew Lloyd Webber ‘s Phantom of the Opera.  This production is written in the classic Broadway musical style (words and songs) as opposed to Webber’s which has no speaking parts. The story is similar and draws inspiration from the novel, but they are not the same.  This production of Phantom has been applauded for being more a true Broadway musical and for the quality of the music and the way the characters have been more developed.

The story opens with a young woman , Christine selling her songs on the street of 19th century Paris.  Her charm and voice capture the attention of Count Phillippe De Chandon  who is a patron of the Paris Opera House.  He sends her there to learn voice lessons in the hope she will join the company.  Her dreams are derailed as new ownership of the opera house instead hires her to work in the costumes department.  The Opera House has long been rumored to be the location of a ghost, The Phantom of the Opera.  Though the new owners scoff at the idea, they are soon convinced when one of their staff is murdered. 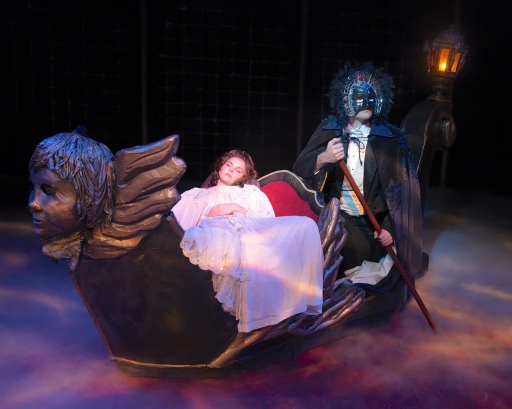 Hearing Christine  sing, the Phantom finally reveals himself to her   (with his famous mask on) and offers to give her voice lessons.   She accepts and as her vocal talents grow, so does a relationship between Christine and the Phantom (Erik) deep under the Opera House.  But as Christine’s star rises in the Opera House so does jealousy and the owner Carlotta plots to ruin her budding career.  It will be the Phantom who comes to her side to save her, though we learn that this relationship is not to be.

The story has great characters, and is filled with both light moments and heavy drama.  Casting for the show is brilliant with Kayleen Seidl taking on the role of Christine (a role originated by Glory Crampton). She charms the audience as she moves effortlessly across the stage. When she sings, her amazing vocal performance soars through the theater capturing and lifting the audience.  On opening night we witnessed a future Broadway star on the Westchester stage.

Matthew Billman wonderfully plays the dramatic and tragic role of the Phantom and though we never see his face under the mask, we feel his anguish and pain.  His vocals too were impressive and commanding.  A  fantastic cast with Broadway, off Broadway and regional  credits include James Van Threuren (Gerard Carriere)  who gives a warm and touching performance, Sandy Rosenberg as Carlotta who brings not only her vocal talent but some lightness to this drama.  The rest of the cast is fantastic, but the evening belongs to Kayleen Seidl and Matthew Billman with their touching performances and their soulful renditions of this amazing musical score.

Maury Yeston’s music and lyrics are memorable.   Songs such as “Melodies de Paris” are light, flowing and are so catchy that they will stay with you for many years. That is very effective song crafting.   Christine and Phantom’s duet of “ Home” is the one of my favorites or the evening, and is exquisite in its delivery.  The  most dramatic numbers of the evening belong to “You are My Own“, and finally “You are Music” delivered by Ms. Seidl at the conclusion of the show which ranks as one of the most moving musical numbers and performances I  have heard in recent memory.   It truly is a brilliant score.

Phantom is a fantastic show with a talented cast.  Costume design was elaborate and perfectly captured 19th Century Paris.  The amazing set design is a large part of the spectacle on stage.  Complete with balconies, suspended cat walks, a chandelier that crashes to the stage, and of course the elevated stage that appears and disappears and serves as the underworld lair of the Phantom.  Throw in dramatic lighting, fog machines, an underground lagoon and a boat that moves across stage.  The audience was amazed.

The production of this special show runs through November 25th.  Then it will pause and resume December 27th to January 27th.  A three course dinner is included in your ticket price and you dine prior to the show.

for tickets and information: